It was back in 2012 – the year of the London Olympics – that Morecambe’s West End struck gold.

The area was one of 150 nationally awarded £1 million to spend over ten years as part of the Big Local programme supported by the Big Lottery Fund.

A new resident-led community partnership, entitled West End Million (WEM), was set up to help improve the area by tackling problems and working with others to provide a voice for the local community in decisions directly affecting them. It began gathering information to inform a community profile and identify priorities.

The longest-serving member of the Partnership is Steve Coghlan who joined in 2013. “I’ve lived in the West End for 18 years and decided to join WEM to try and improve the area and meet other people,” he said.

Steve, like all Partnership members, is a volunteer. Any West End resident can join and be involved in a variety of ways.

Volunteers are supported by some part-time staff and a locally trusted organisation to help with the technical and legal side of delivering activities and administering funding. WEM is independent and not part of any local authority, housing association, political or religious organisation.

Organisations and projects to have already benefitted from WEM’s work are many and varied from house front improvements and Balmoral Community Allotment to the Seed peer support group for people with chronic illness and Northern Angelz, a well-being venture ‘club’ encouraging vulnerable isolated people to become more active.

WEM even prevented Stanley’s Youth and Community Centre from having to close for a month earlier this year by providing financial support and has also grant funded their youth club, computer lessons and the Melting Pot music group which is based there.

Steve thinks among its main achievements to date have been the support they’ve given to Stanley’s, the Melting Pot and The Exchange Creative Community.

Earlier this year, WEM started a full review of past activity and undertook some further consultation work which highlighted crime and anti-social behaviour, food poverty, children and young people, and health and mental wellbeing as high on the agenda.

They have developed a new plan for future work which was submitted to Big Local in the summer.

Matt Leach, Chief Executive of Local Trust who oversee WEM’s funding, met the Partnership and toured the West End recently, describing it as “a fantastic area with lots of really committed people and a strong new plan.”

That plan will be officially launched on November 1 from 11am-2pm at The Alhambra and any organisations and groups that are based in or deliver work in the West End are welcome to drop in and find out more. Alternatively, information and updates on WEM are available at www.westendmillion.co.uk 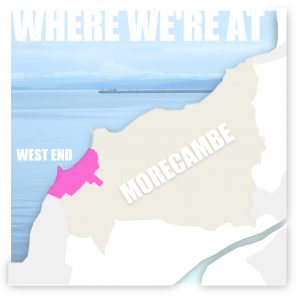 The best way to contact WEM is via the email address below.
You can also write to us at
West End Morecambe Big Local
c/o LDCVS, The Cornerstone,
Sulyard Street, Lancaster, LA1 1PX